2018 Coffee with Coaches in Review

Last month, Sports Imports hosted its first ever Coffee with Coaches event at the AVCA Convention in Minneapolis. Ten coaches from all over the country representing programs at every level of play won a spot at a roundtable discussion with renowned coaches Kevin Hambly and Salima Rockwell.

The attending coaches entered a giveaway held prior to the convention to win a seat at the roundtable.  The group of randomly selected winners was only a fraction of the hundreds of entries that were received from coaches who were interested in the event. Intentionally limited to a small number of winners, every coach who won had the opportunity to personally ask a question and engage in the conversation with Coaches Hambly and Rockwell. 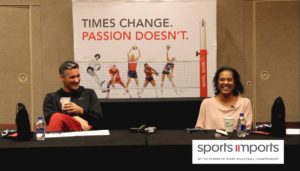 It took only a few minutes to learn that the coaches all had questions with a similar theme — culture, leadership, and developing players — all of which are at the forefront of the game today. For over an hour, the group discussed questions like, “What do you do to actively create a culture of high performance in your practices each day?” and “What are the most important aspects to focus on in the development of younger volleyball players?”

One coach asked, “How do you begin to change the culture of a program you are taking over as a young coach?”  Having success in many programs, Coach Hambly was happy to discuss this ever-growing subject.  He said, “Everyone has their way of coaching.  The one thing is, it has to fit all the individuals in the culture.  It has to fit you as a coach, and it has to fit the players. If you’re trying to force something on them, it’s just not going to work out. It’s not going to take.”

With the ability to offer a different perspective on the topic as one of the most notable assistant coaches in the game, Coach Rockwell added, “It’s a different approach from an assistant for sure.  And what I can do, and what I can help with is more on an individual basis–and mentoring and understanding how things work and creating that culture within the culture that already exists.”

In the end, Coach Hambly shared some advice with the coaches who are at the early stages in their growing careers. “You gotta figure out who you are as a coach, and what your principles are, and how you want to treat people, and all those kinds of things.  And, that comes with experience.”  Both Coach Hambly and Coach Rockwell agree that education and continuing to learn the game is everything.  Hambly expressed to the group that he’s still always learning, always studying.  “The game is going to progress. And if you understand the game, you can teach the game.” Coach Rockwell added, “Talking to people and finding out as much as you can about the process.  Any educational things you can do.  I mean, for me, education is everything…and you have to want it.  You have to want to work hard, you have to want to grind for a while.” 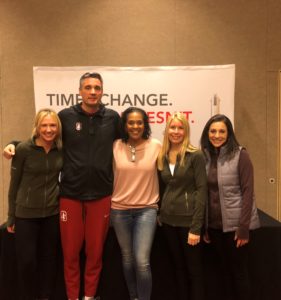 The attendees all agree it was an event they will always remember, especially since they later learned they had spent the morning with the coach of the 2018 National Champions.  That same evening, Coach Hambly and the Stanford Cardinals won the 2018 NCAA National Championship in a hard-fought, 5-set match against Nebraska.

The team at Sports Imports is grateful to all of the coaches who attended the first Coffee with Coaches event.  And of course, a sincere thank-you goes to Salima Rockwell and Kevin Hambly for hosting and passing on their knowledge, experience, and support to other coaches.

Want the opportunity to learn more from these coaches? Coach Rockwell and Coach Hambly, along with Coach Hugh McCutcheon of the University of Minnesota, are hosting a coaching clinic May 17-19 In Austin, Texas.  Check out their website to learn more and to register!

"The Starlings Unity Tournament is a time where you can inspire gratitude, compassion and a giving heart in your coaches, players and families." Sign up today and be eligible to win a free net system and custom pads! Learn more here: https://www.starlings.org/unity

The #NCAAVB Tournament starts tonight with 64 teams hoping to punch their ticket to Columbus Dec. 16 & 18.

@OhioStAthletics AD Gene Smith @OSU_AD helps get us ready for the 🏐🏆.

Wanna win 2️⃣ tickets? Like, comment or RT this for a chance. Do all 3️⃣ to triple your odds.