It is our privilege to announce that Jillian Williams is the recipient of the 2017 Sports Imports/AVCA Courage Award. The Courage Award was founded to recognize a member of the volleyball community who in the face of hardship and adversity displays great courage and a determination to use their experience to better the world around them.

In the fall of 2015, Jillian Williams came to the Texas Lutheran Bulldogs as a 2015 First Team All-District (2014 Defensive MVP) and 2013-2015 All-Academic from Stinton High School in Odem, TX. During her freshman season, Jillian began to experience knee pain which her trainer attributed to a possible torn meniscus. She went to see an orthopedic surgeon, who identified a quickly growing tumor and sent Jillian and her family to an oncologist. In February of 2016, Jillian underwent a surgical bone biopsy.  In her blog, Jillian describes post-surgery: “The next thing I remember was waking in recovery. The first words out of my mouth to the nurse were, “Is it cancer?” I got no response out of her. I fell back to sleep for a little while, then I was woken up by my daddy rubbing my leg and my momma crying. When I asked her what it was her response was ”…it’s not good”. At that point, I had to choose whether I was going to break down and let this take over me, or if I was going to begin my fight and that’s when I chose #2. I felt as if a wave of hope rushed over me and I knew God had a huge plan for me.”

And fight she would. She persevered through 26 rounds of chemotherapy in 34 weeks for Ewing’s Sarcoma, and underwent rotationplasty surgery.  The surgeons amputated her leg from the thigh to below her knee, rotated the ankle and foot 180 degrees and reattached it.  Jillian regarding her decision to have the surgery: “I told my parents that’s the surgery I want to do. They told me I could play volleyball again.” 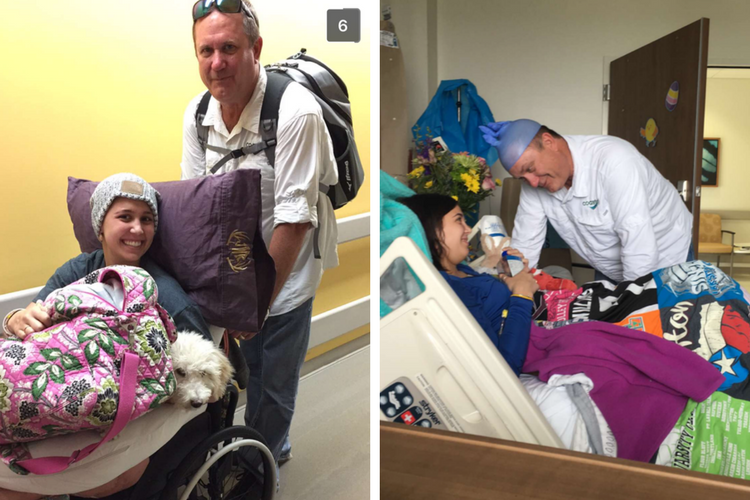 Today, Jillian is back on the court and training with her sights set on the United States Sitting Team.  She provides hope and encouragement through the blog she began at the beginning of this journey http://jilliansleapthroughcancer.com and through founding the and leading the Live ‘N’ Leap Foundation.

“Yes, ending treatment is a relief but that is all we had to look forward to and some were not even that lucky.  So that is where my idea came to life. Although I was not able to have an exciting trip or anything at the end of treatment. I made it a goal of mine to provide other patients with that opportunity! Many times, adolescents and young adults get looked over because we are considered adults, but are not yet the age to support ourselves.  I pray to fulfill the needs and dreams of AYA patients that way they have an exciting “something” to look forward to as well.”

Jillian will receive the Courage Award at the American Volleyball Coaches Association All-America/Players of the Year Banquet on Friday, December 15, 2017 in Kansas City, Missouri. The banquet will be held in conjunction with the AVCA Convention.

To learn more about Jillian or to donate: