It is our honor and privilege to announce that Rick Dunetz is the recipient of the 2018 Sports Imports/AVCA Courage Award. The Courage Award was founded to recognize a member of the volleyball community who in the face of hardship and adversity displays great courage and a determination to use their experience to better the world around them.

As a first-time head volleyball coach in 2004, Rick Dunetz learned the true meaning of hope and energy. While finding ways to instill confidence in a struggling team, Rick was facing his own challenges.  That year, Rick’s mother Gloria was diagnosed with breast cancer for the second time.  Deciding to share his personal story with his team, he was immediately inspired by how they responded.  Sparked with spirit and determination, the West Springfield High School volleyball team recorded win after win, including a district championship title — the first one in school history.  Gloria attended many of the matches, and she too was inspired by the way the team handled adversity with such courage.  Rick saw a transformation in his mother during that season.  She learned that healing could come from more than medicine — it could also come from hope, energy, and persistence.

The “miracle season” with his volleyball team and the strength of his mother during her battle led him to create the Side-Out Foundation.   Started as one small team which has now grown to a coast to coast, The Side-Out Foundation has ignited the Dig Pink Movement, which unites the volleyball community to support the development of treatment for breast cancer patients.  Across the country, athletes from different schools, clubs, and tournaments come together to host Dig Pink events to raise funds for this cause.

After a battle fought with much courage and spirit, Gloria passed away in 2010.  Fueled by an even stronger passion, Rick and his team at the Side-Out Foundation became committed to funding cutting-edge research and treatment to extend the lives of patients living with stage IV.   Led by Rick’s father Bryant, the foundation works with leading breast cancer oncologists and molecular biologists and has produced a series of clinical trials to benefit patients selecting treatment for late-stage breast cancer–all sponsored by the sport of volleyball.  Rick is determined to give stage IV patients more time with their families and bring us closer to finding a cure, and the research is the only of its type anywhere in the world, truly making an impact.  In addition, the research offers comfort to survivors who are worried about contracting stage IV later in life. 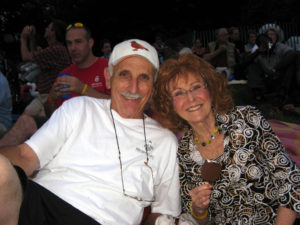 Rick continues to be energized by the players, coaches, and parent supporters and their commitment to this mission. He says, “I have a statement on my whiteboard that reminds me about the greatness of our athletes.  ‘When you give a kid the opportunity to show their greatness they will.’  The key word is ‘opportunity’.  Sometimes as coaches we don’t give our athletes the right opportunity at the right time.  Dig Pink is one of those opportunities and every year the kids surprise me.”

Rick will receive the Courage Award at the American Volleyball Coaches Association All-America/Players of the Year Banquet on Friday, December 14, 2018, in Minneapolis, Minnesota.

To learn more about Rick and the Side-Out Foundation or to donate or host a Dig Pink event, please visit their webpage.

You can also learn more out the Side-Out Foundation’s story by watching their video here. https://www.youtube.com/watch?v=YWII9pilahQ

"The Starlings Unity Tournament is a time where you can inspire gratitude, compassion and a giving heart in your coaches, players and families." Sign up today and be eligible to win a free net system and custom pads! Learn more here: https://www.starlings.org/unity

The #NCAAVB Tournament starts tonight with 64 teams hoping to punch their ticket to Columbus Dec. 16 & 18.

@OhioStAthletics AD Gene Smith @OSU_AD helps get us ready for the 🏐🏆.

Wanna win 2️⃣ tickets? Like, comment or RT this for a chance. Do all 3️⃣ to triple your odds.