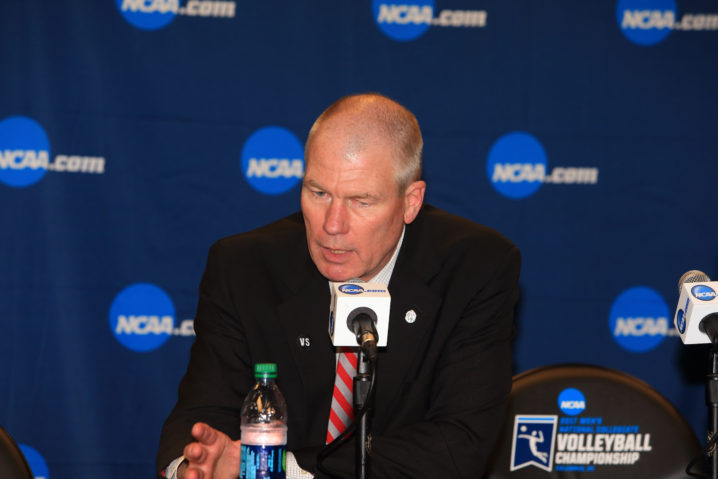 What is one of your favorite aspects of coaching?

My favorite aspect of coaching is when you see a student-athlete conquer a skill that you have been working with them on, and the confidence and enthusiasm that they begin to display when they realize that they have accomplished it.  That is a very rewarding part of coaching.

What is your favorite road trip story?

My favorite road trip story occurred many years ago when we scheduled our team to play at UC Santa Cruz for the first time ever.  We had played at Stanford the previous night and we were staying in hotels in the Stanford area. We had to drive over the mountains to get to Santa Cruz for the match.  The UC Santa Cruz coach had really promoted the match because it was Ohio State a DI program playing at UC Santa Cruz a D3 Program.  He was also promoting this as a fundraiser for a young man and his family who had been involved in an accident and was now a quadriplegic.  It was going to be a big night for UC Santa Cruz Men’s Volleyball.

We began the drive over to Santa Cruz from the Stanford area in 3 vans and as we got to the about the top of the mountain pass, the road was closed due to heavy rains causing some mudslides on the roads.  They detoured us onto a very narrow two-lane road that wound around the mountains through a very dense forest.  We had left early, but not early enough.  As we were on this road for what seemed like hours, I knew we were not going to make it in time for the start of the match.  This was of course before cell phones and we had no way to contact the coaches at UC Santa Cruz to update them on our situation.  We kept on going and finally arrived in the midst of a driving rainstorm about 30 minutes late for the match.  I pulled up to the closest drop off point near the gym to let the team enter the gym and when the guys opened the doors of the van, I heard a collective roar from inside the gym  “THEY ARE HERE”.  The Crowd had stayed at the gym and had grown more energetic even though we were now 30 minutes late for the match.  We had the guys hurriedly get prepped, we warmed up in about 15-20 minutes and began the match at 8:00 p.m.  The crowd was Off the Hook as my boss Gene Smith would say, and UC Santa Cruz played a great match.  Our Buckeyes prevailed in 4 sets and really had a great experience as it became less about who would win or lose, but more about the fact that UC Santa Cruz appreciated us being there, and they were also supporting a great cause in a way to help this young man that had sustained a life-changing injury.  At the end of the match, the crowd came out of the stands and just wanted to thank both teams for playing well and playing hard and having a great contest.

I know for me it was one of the best matches I have ever been a part of.  We did not win any major championship that night, but we helped a lot of people really enjoy watching a collegiate volleyball match.  A memory I will never forget.

Do you have a favorite hobby or cause you are passionate about?

I really enjoy Fly fishing and I believe that it has become my favorite hobby.  I find that when I am fishing, I become so engrossed in the process that I don’t tend to think about things back at the office or the gym.  It has become a great way for me to escape.

Please tell us something about yourself that most people would not know.

When I was just out of college, one of my college roommates and I climbed the highest peak in Colorado, (Mt. Elbert).  It was really just a long walk up a steep trail, but once we got to the top it was an unbelievable view. It only lasted for about 15 minutes as an electrical storm was closing in on us and we immediately high tailed it down the mountain so as not to be struck by lightning.